ACCE 2023 - The Holy Eucharist "Behold, I make all things new" (Resources from presentation) 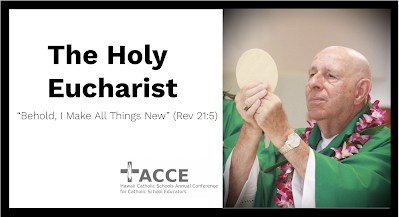 They are "the first Wednesday, Friday, and Saturday of each of the four seasons of the year, set apart as fast days by the Catholic Church. According to the testimony of Pope Leo, they originated in the time of the Apostles, who were inspired by the Holy Ghost to dedicate each season of the year to God by a few days of penance; or, as it were, to pay three days’ interest, every three months, on the graces received from God. The Church always commanded the Faithful to fast at the beginning of each of the four seasons of the year, because it is at this time that she ordains the priests and other servants of the Church, which even the Apostles did with much prayer and fasting." (Thein, J., 1900. Ecclesiastical Dictionary)
A much deeper look at the Ember Days, including a more detailed look at its historical roots, can be found in a great article by Michael P. Foley called ʻThe Glow of the Ember Daysʻ. You can read it here - http://rorate-caeli.blogspot.com/2008/09/glow-of-ember-days.html
Also during Advent is when the the Church prays the Advent O Antiphons. Here is a brief lesson I made for my students about this wonderful Tradition
In addition to those beautiful traditions there are also many other traditions that have been practiced by the Church throughout the ages like celebrating the feasts of
St Nicholas - https://nativecatholic.blogspot.com/2013/12/advent-traditions-feast-of-st-nicholas.html
St Lucy - https://nativecatholic.blogspot.com/2013/12/advent-traditions-feast-of-st-lucy.html
St Barbara - https://nativecatholic.blogspot.com/2013/12/advent-traditions-feast-of-st-barbara.html

November 28th, Lā Kūʻokoʻa, is a Hawaiian Kingdom holiday that was first celebrated in 1843 to celebrate Hawaiʻi’s sovereignty and independence. This special day recognizes the signing of the Anglo-Franco proclamation acknowledging Hawaiʻi’s independence.

The Wind & The Reckoning

Movie to Movement, (https://www.movietomovement.com/) recently graciously sponsored EPIC Ministry with the opportunity to watch a brand new film titled 'The Wind & The Reckoning' starring Jason Scott Lee, Lindsay Watson,  Henry Ian Cusick, & Kahiau Perreira. It is a Hawaiian Kingdom Era movie and is 80% in the Hawaiian language. The IMDB summary is as follows - 1893. The Hawaiian Kingdom has been overthrown by a Western power just as an outbreak of leprosy engulfs the tropical paradise. The new government orders all Native Hawaiians suspected of having the foreign disease banished permanently to a remote colony on the island of Moloka'i that is known as 'the island of the living grave'. When a local cowboy named Ko’olau and his young son Kalei contract the dreaded disease, they refuse to allow their family to be separated, sparking an armed clash with brutal white island authorities that will make Ko’olau and his wife, Pi’ilani heroes for the ages.

Here is a trailer for the movie

Here is my brief video review of this excellent film
What an amazing movie. Chicken skin to hear our language used so beautifully through out the movie. The movie gives great respect to the Hawaiian culture and to the language. I truly hope this is the beginning of many more Hawaiian movies. So many stories to tell, so many great lessons to be learnedFrom this movie, besides bravery and perseverance, the biggest lessoned demonstrated is the immense power of the sacrament of marriage. Ko'olau and Pi'ilani truly understood the indissolubility of the bond they made before God and it was that loving bond that kept them together until the very end.
For more information about the film please visit - https://www.windandreckoning.com/ 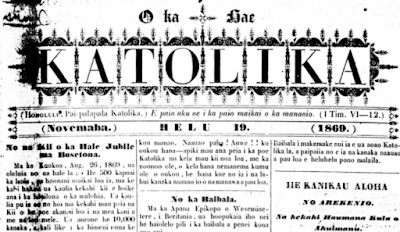 On the rare occasion of having 'free time' I enjoy reading and translating old Hawaiian kingdom newspapers. Up until the fairly recent digitization of thousands of pages of Hawaiian newspapers, the historiography of Hawaii had been relegated to just a handful of English sources. The translation of these newspapers over the last several decades has revealed a multitude of 'voices', written in the Hawaiian language, which share a very different view of what many of us locals understand as our history. It is always exciting to step into the past to learn how our ancestors thought and how they viewed the developing world around them.

On one such occasion I stumbled upon a Hawaiian Catholic publication from the late 1860s called O Ka Hae Katolika (The Catholic Standard) It was published from 1868 - 1871 by the Pai-palapala Katolika (Catholic Printing Press) This was during the historical period in which Bishop Louis D. Maigret, the Vicar Apostolic of Sandwich Islands at the time, was working hard to evangelize the kanaka maoli (native Hawaiians) and other Hawaiian subjects in the decades following Kauikeaouli Kamehameha IIIʻs edict of religious toleration. This was also the historical period in which the 'Ahahui Hoopuka Nūpepa Kūikawā o Honolulu', a group of independent newspapers founded by native Hawaiians, was actively working to give a uniquely Hawaiian voice to political groups and faith communities. The O Ka Hae Katolika clearly expressed that native Hawaiian Catholics were very proud of being Catholic and were also very proud of being Hawaiian. This newspaper gave them the opportunity to share Catholic news, stories, and insights from a uniquely Hawaiian cosmology as opposed to only reading Catholic news published by foreign presses.

Each issue of the O Ka Hae Katolika is filled with news from the Catholic church around the globe, commentaries on Scripture and church teaching,  stories of the saints, local happenings of the Church here in Hawaii,  stories of beloved local priests, and even letters from Bishop Maigret. In addition, and of very unique interest, some of the issues published mele (songs) and oli (chants) written in honor of some of the beloved priests that brought the Catholic Faith to Hawaii and lived their lives in service to those entrusted to their care.

The tagline to the O Ka Hae Katolika is "A paio aku oe ie ka paio maikai o ka manaoio" which means to "Fight the good fight of faith" – a bold call to mission as relevant today as it was one hundred-fifty years ago.
CLICK HERE TO VIEW THE ENTIRE O KA HAE KATOLIKA ARCHIVE

Here is a video clip from the uhi (traditional Hawaiian tattoo) I received from Kawika Au. There is a lot of familial and experiential symbolism in the uhi. I will explain the symbolism one day. There are many layers to it. For now I just wanted to share the video