- Whereby He teaches, that whatever is said by the holy Apostles must be received, since he who heareth them heareth Christ, and an inevitable punishment therefore hangs over heretics who neglect the words of the Apostles; for it follows, and he who despises you despises me.- Cyril of Alexandria (412 AD).

(Thomas Aquinas, S., & Newman, J. H. 1843. Catena Aurea: Commentary on the Four Gospels, Collected out of the Works of the Fathers)

Cardinal Newmanʻs reflection on the Mass 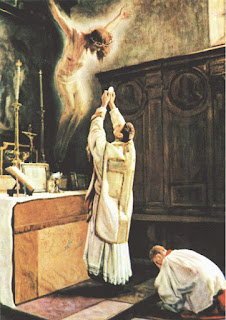 “Nothing is so consoling, so piercing, so thrilling, so overcoming, as the Mass, said as it is among us. I could attend Masses forever and not be tired. It is not a mere form of words—it is a great action, the greatest action that can be on earth. It is not the invocation merely, but, if I dare use the word, the evocation of the Eternal. He becomes present on the altar in flesh and blood, before Whom angels bow and devils tremble. This is that awful event which is the scope, and is the interpretation, of every part of the solemnity." - Cardinal Newman

Chesterton on the Destruction of Perennial Traditions 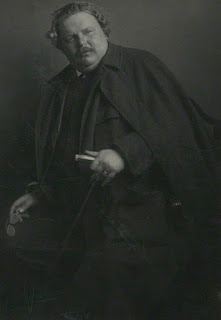 "Suppose that a great commotion arises in the street about something, let us say a lamp-post, which many influential persons desire to pull down. A grey-clad monk, who is the spirit of the Middle Ages, is approached upon the matter, and begins to say, in the arid manner of the Schoolmen, “Let us first of all consider, my brethren, the value of Light. If Light be in itself good—” At this point he is somewhat excusably knocked down. All the people make a rush for the lamp-post, the lamp-post is down in ten minutes, and they go about congratulating each other on their unmediaeval practicality. But as things go on they do not work out so easily. Some people have pulled the lamp-post down because they wanted the electric light; some because they wanted old iron; some because they wanted darkness, because their deeds were evil. Some thought it not enough of a lamp-post, some too much; some acted because they wanted to smash municipal machinery; some because they wanted to smash something. And there is war in the night, no man knowing whom he strikes. So, gradually and inevitably, to-day, to-morrow, or the next day, there comes back the conviction that the monk was right after all, and that all depends on what is the philosophy of Light. Only what we might have discussed under the gas-lamp, we now must discuss in the dark". - GKC

The Scapular of the Blessed Virgin Mary 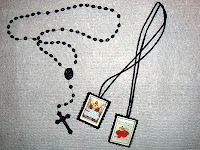 What is the Scapular?

"The scapular was a long narrow strip of cloth, covering the shoulders and hanging down before and behind to the knees, worn by certain religious orders. Secondly, two small pieces of cloth connected by strings and worn over the shoulders by laymen. The Confraternity of the Scapular is quite ancient. It was inspired and revealed by the Holy Virgin to the blessed Simon Stock, sixth general of the Carmelite Order, about the beginning of the thirteenth century. This venerable religious, who had entertained from his earliest years a truly filial confidence in Mary, was one day in prayer, when the Queen of Heaven appeared to him, surrounded by a multitude of blessed spirits, and holding in her hand a scapular of the Order of Carmel. She gave it to him with these words: “Receive, my dear son, this scapular of thy order, as the distinctive sign of my confraternity, and the mark of the privilege that I have obtained for thee and the children of Carmel. Whosoever dies while piously wearing the scapular, shall be preserved from eternal flames. It will be a sign of salvation, a safeguard in danger, and a special pledge of peace and protection till the end of time.” (Manuel du Scap, by M. de Sambucy, p. 28.)

What are the promises attached to the Scapular? There is a twofold promise!

"Our divine Mother promises, in the first place, to save from the pains of hell those who die piously wearing the scapular." (Thein. Ecclesiastical Dictionary.1900)

"The Blessed Virgin promises, in the second place, that she will come and deliver out of purgatory the wearers of the scapular on the first Saturday after their death" (ibid)

How do you receive these privileges of the Scapular?

To receive the 1st privilege, that of a happy death, in addition to being in the State of Grace, one must "(1) receive the blessed scapular from the hands of a priest who has the power of giving it; and (2) wear it around the neck day and night, in health and in sickness, in life and at death." (ibid)

"To enjoy the second privilege, that is, to have a speedy release out of purgatory, it is also necessary for all the members to observe the chastity proper to their state: virginal chastity in the state of celibacy; conjugal fidelity in the state of marriage; and continence in the state of widowhood. Moreover, for such as can read: to recite daily the Canonical Office of the Church, or the Little Office of the Blessed Virgin, according to Roman Breviary. For such as cannot read: to supply for the Office (1) by not failing in any of the fasts prescribed by the Church; and (2) by abstaining from flesh-meat on Wednesdays, in addition to Fridays and Saturdays, except on Christmas when it falls on any of these days. In case of grave hindrance, the abstinence is binding; but it is proper to have recourse to one’s confessor, so as to obtain a commutation." (ibid)

Foreshadowing of the Scapular found in Holy Scripture

Is 61:10 - "I will greatly rejoice in the Lord, and my soul shall be joyful in my God: for he hath clothed me with the garments of salvation: and with the robe of justice he hath covered me, as a bridegroom decked with a crown, and as a bride adorned with her jewels."

Is 22:21 - "And I will clothe him with thy robe, and will strengthen him with thy girdle, and will give thy power into his hand: and he shall be as a father to the inhabitants of Jerusalem, and to the house of Juda.

Jn 19:2 - "And the soldiers platting a crown of thorns, put it upon his head: and they put on him a purple garment"

Rev 6:11 - "And white robes were given to every one of them one; And it was said to them that they should rest for a little time till their fellow servants and their brethren, who are to be slain even as they, should be filled up. "

Rev 7:13-14 - "And one of the ancients answered and said to me: These that are clothed in white robes, who are they? And whence came they? And I said to him: My Lord, thou knowest. And he said to me: These are they who are come out of great tribulation and have washed their robes and have made them white in the blood of the Lamb. "

The Angelic Hierarchy listed in Scripture


The Nine choirs of the Angelic Hierarchy are listed in Holy Scripture:

Ge 3:24– “And he cast out Adam: and placed before the paradise of pleasure Cherubims, and a flaming sword, turning every way, to keep the way of the tree of life."

Ep 1:20–21 “Which he wrought in Christ, raising him up from the dead and setting him on his right hand in the heavenly places. Above all principality and power and virtue and dominion and every name that is named, not only in this world, but also in that which is to come”

Cl 1:16 “For in him were all things created in heaven and on earth, visible and invisible, whether thrones, or dominations, or principalities, or powers. All things were created by him and in him”

1 Pt 3:22 “Who is on the right hand of God, swallowing down death that we might be made heirs of life everlasting: being gone into heaven, the angels and powers and virtues being made subject to him.”

Ju 9. “When Michael the archangel, disputing with the devil, contended about the body of Moses, he durst not bring against him the judgment of railing speech, but said: The Lord command thee”

image from the 'Public domain' via wikimedia commons.Mary Queen of Heaven surrounded by Angels

St. Clement of Alexandria on the Primacy of Peter 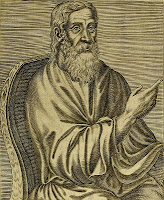 "Nor does the kingdom of heaven belong to sleepers and sluggards, ‘but the violent take it by force’ (Mt. 11:12). Therefore on hearing those words, the blessed Peter, the chosen, the pre-eminent, the first of the disciples, for whom alone and Himself the Saviour paid tribute, quickly seized and comprehended the saying. And what does he say? ‘Lo, we have left all and followed Thee’ (Who is the rich man that shall be saved?, c. 180 AD)

image from the 'Public domain' via wikimedia commons {PD-old-70}.Clement of Alexandira. Andre Thevet