ʻMemorials of the Saintsʻ - The Biblical Basis for Relics

According to the Catholic Encyclopedia, a relic is some object, notably part of the body or clothes, remaining as a memorial of a departed saint. The Church teaches that relics may be the occasion of God’s miracles, and in this the Church follows Scripture. (From the 25th session of the Council of Trent)

In this Bible Study I go through 4 of the major verses in Scripture that clearly show that Relics are part of not only the Old Testament but of the New Testament Faith. There is a clear continuity between present-day Catholic practice and ancient practice

2 Kgs. 13:20-21“So Eli'sha died, and they buried him. Now bands of Moabites used to invade the land in the spring of the year. And as a man was being buried, lo, a marauding band was seen and the man was cast into the grave of Eli'sha; and as soon as the man touched the bones of Eli'sha, he revived, and stood on his feet.”

Matt. 9:20-22“And behold, a woman who had suffered from a hemorrhage for twelve years came up behind him and touched the fringe of his garment; for she said to herself, "If I only touch his garment, I shall be made well." Jesus turned, and seeing her he said, "Take heart, daughter; your faith has made you well." And instantly the woman was made well.”

Acts 5:14-16 “And more than ever believers were added to the Lord, multitudes both of men and women, so that they even carried out the sick into the streets, and laid them on beds and pallets, that as Peter came by at least his shadow might fall on some of them. The people also gathered from the towns around Jerusalem, bringing the sick and those afflicted with unclean spirits, and they were all healed.”

Acts 19:11-12“And God did extraordinary miracles by the hands of Paul, so that handkerchiefs or aprons were carried away from his body to the sick, and diseases left them and the evil spirits came out of them.”

St. Clement of Rome on the Inerrancy of Scripture

"You have studied the Holy Scriptures, which are true and inspired by the Holy Spirit. You know that nothing contrary to justice or truth has been written in them."
-St. Clementʻs Letter to the Corinthians, 45

The Alb, so called from its white color—albus  meaning white, is "an ample, loosely-fitting garment of pure linen, entirely enveloping the body, and fastened at the neck by means of strings.


The use of a vestment of this kind is of the highest antiquity, for we find it employed by all nations in their religious services. It is the same as the linen garment ordered to be worn by the priests of the Old Law (Exod. 28; Levit. 8) King David wore a linen Alb when translating the Ark of the Covenant from the house of Obededom to Jerusalem (1 Paral. 15:27)."

"Figurative Signification of the Alb.—According to Pope Innocent III. (De Sacr. Altaris Mysterio, 57), the Alb, from the purity of its color, denotes newness of life, and reminds us of St. Paul’s admonition to the Ephesians, chap. 4: “Put off the old man with all his acts, and clothe yourselves with the new man, who, according to God, is created in justice and holiness of truth.” This beautiful idea of a new life, as signified by the Alb, is very forcibly presented to us in Holy Baptism, where the newly-regenerated receives a white garment with these significant words: “Receive this white and spotless garment which you are to bear before the tribunal of our Lord Jesus Christ, that you may possess eternal life. Amen.”

Priests of the Latin Church put on the Alb with the prayer: “Purify me, O Lord! and make me clean of heart, that, washed in the Blood of the Lamb, I may possess eternal joy.”

Since our priests are ʻIn persona Christiʻ there is also a pious tradition that ties the all the priestly vestments (which are put on right prior to the offering of Mass) to the Passion and Death of Christ.  This tradition traces the Alb specifically back to Luke 23:11 wherein Jesus is clothed with a white garment:  "And Herod with his army set him at nought and mocked him, putting on him a white garment: and sent him back to Pilate." 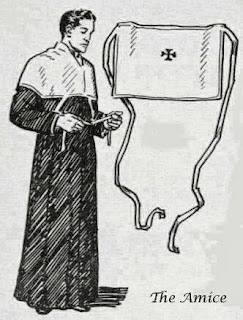