In my catechetical work I meet many groups of fervent catholics seeking to understand the perennial teachings of Church and engage the hard questions that we face today as Catholics. The other night I ran into an intelligent catholic who really liked using the word 'heretic' to describe anyone that disagreed with one of his ideas or beliefs. I happened to agree with most of what this person believed and said BUT I did take issue with his use of the word 'heretic' so loosely.

Declaring someone a 'Heretic' is no small deal and I think its important to understand what a heretic actually is according to the Church and when someone might actually just be in error on a specific concept or topic.

According to Canon Law "A heretic is a person who has been baptized and claims to be a Christian, but who pertinaciously denies or doubts a truth which must be believed with divine and Catholic faith (1325, 2)." (Canon 751 in the 1983 Code)

The key word is pertinaciously (or 'obstinately' in modern translations). Without true pertinacity, against that which they are in error about, the person is not technically a heretic and is rather 'someone who is in error'

"Hence it is evident that a heretic who obstinately disbelieves one article of faith, is not prepared to follow the teaching of the Church in all things; but if he is not obstinate, he is no longer in heresy but only in error"

The difference can mean a world of difference when it comes to charitably discussing errors in belief with those who are in error... These days calling someone a 'heretic' is normally of no benefit in trying to bring that person to a greater understanding of the Truth. If someone IS a heretic then it is what it is BUT if they are simply in error about a topic I think its prudent to reason with them and explain to them the orthodox teaching as opposed to declaring them a heretic immediately without doing our part to respond to them, according to 1 Pet 3:15, with gentleness and respect

Pope Francis to Confessors around the world 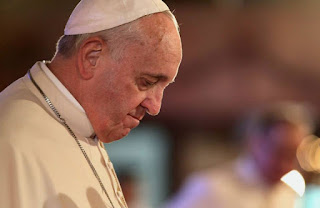