"My brothers and sisters, it is through three things that faith stands firm, that piety exists, and that virtue remains, namely, prayer, fasting, and mercy. What prayer requests through unrelenting petition, fasting obtains, and mercy accepts. Prayer, mercy, fasting: these three are one; these three invigorate one another. Fasting is the soul of prayer; mercy gives life to fasting. May no one divide these three; they are not to be separated. A person who has only one of them or does not have all three of them together has none of them. And so the person who prays is to fast. Whoever fasts is to show mercy"

Congratulations to the Newly Confirmed! 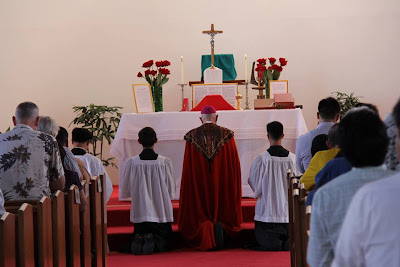 This past Sunday (August 18th, 2013) His Excellency Bishop Larry Silva came to administer the sacrament of Confirmation for 6 Confirmandi of our community. Congratulations to Britney, Nathan, Joseph, Gabriella, Claudia, and Sophie!

The Feast of the Assumption of the Blessed Mother

Today, August 15th, is the great feast of the Bodily Assumption of the Blessed Mother of God, Mary most holy.

If you are interested in studying the biblical and traditional basis of the Assumption and the other beautiful Marian Dogma check out these posts from several years back:

Mary Most Holy: Mother of God & Ark of the New Covenant

image from the 'Public domain' via wikimedia commons. Assumption of Mary
Magisterial excerpt from Ott, L., 1957. Fundamentals of Catholic dogma

Vicarious Suffering (Even for those in Purgatory) 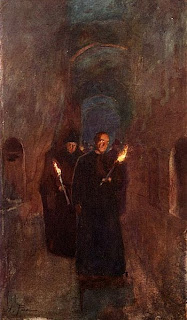 It says in James that the prayer of a righteous person is extremely powerful (cf. Jas 5:16). Thats why we ask certain people or groups to pray for us.

We wouldnt normally, lets say, ask a random person on a street corner to prayer for us. Rather, we would ask those  which we believe actually DO pray and who we believe God will hear.

This is why we ask the saints to pray for us. They are at the very throne of God offering up their prayers on our behalf (Rev 5:8) Who better to ask for prayers than those who are living in eternal Glory in the presence of God!

Suffering on behalf of others is very scriptural:

Col 1:24 - "Who now rejoice in my sufferings for you and fill up those things that are wanting of the sufferings of Christ, in my flesh, for his body, which is the church"

1 Jn 3:16 -  "In this we have known the charity of God, because he hath laid down his life for us: and we ought to lay down our lives for the brethren"

Phil 2:17 -  "Yea, and if I be made a victim upon the sacrifice and service of your faith, I rejoice and congratulate with you all"

2 Tim 2:10 - "Therefore I endure all things for the sake of the elect, that they also may obtain the salvation which is in Christ Jesus, with heavenly glory."

We are called to imitate St. Paul in sufferings for others.

"that neither death, nor life, nor angels, nor principalities, nor powers, nor things present, nor things to come, nor might, Nor height, nor depth, nor any other creature, shall be able to separate us from the love of God which is in Christ Jesus our Lord." (Rom 8:38–39)

Since WE are united as one body in Christ THROUGH the love of God . . . death does not separate our communion with another in Christ. So just as much as I can pray for you while you are alive here on earth, so too can I pray for you or suffer for you (for the quick remission of temporal punishment due to your sin) after you depart from this earthly life.

image via creative commons license. A Procession in the Catacomb of Callistus (Prayers for the dead). Alberto Pisa. 1905

ʻOutburst from the heart!ʻ From St.Therese of Lisieux 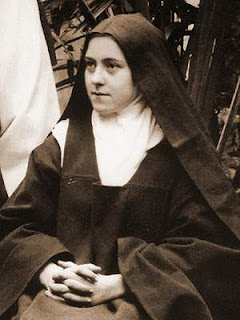 I took a break from my normal reading of the great Catechetical and Theological Fathers of the Church to seek out spiritual wisdom from a great Saint and Doctor. Her words give me great hope for my own spiritual life that even when I have not the strength to be elaborate in prayer, my Father hears me!

"Prayer is, for me, an outburst from the heart; it is a simple glance darted upwards to Heaven; it is a cry of gratitude and of love in the midst of trial as in the midst of joy! In a word, it is something exalted, supernatural, which dilates the soul and unites it to God. Sometimes when I find myself, spiritually, in dryness so great that I cannot produce a single good thought, I recite very slowly a Pater or an Ave Maria; these prayers alone console me, they suffice, they nourish my soul."


"I have not the courage to force myself to seek beautiful prayers in books; not knowing which to choose I act as children do who cannot read; I say quite simply to the good God what I want to tell Him, and He always understands me."
- Story of A Soul, St. Therese of Lisieux

*Feel Free to Come back and visit this page by the end of the week (~ March 6th) I will have a SCREEN SHOT Video Made reviewing the powerpoint and sharing some further insights :)

*Please contact me to arrange a 15 minute ZOOM to go over questions you have or to arrange setting up your Virtual Classrooms! (nativecatholic@gmail.com / 808-223-3249) :)

1) Ancient and Perennial Truths in a Modern World:
‘CHRIST NEVER CHANGES (HEBREWS 13:8) AND SINCE CHRIST IS THE FULLNESS OF TRUTH, TRUTH NEVER CHANGES. WE KNOW THAT TRUTH SETS US FREE (JOHN 8:32) SO WE NATURALLY HAVE A DESIRE TO SEEK THAT TRUTH’

HOW THEN DO WE FULFILL OUR CALL IN MT 28 IN OUR MODERN WORLD?