The ʻother sheepʻ on Good Shepherd Sunday 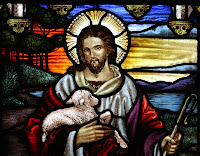 The Gospel for Good Shepherd Sunday (2nd Sunday after Easter) is John 10:11 - 16. A question is often raised of verse 16 where it says: "And other sheep I have that are not of this fold: them also I must bring. And they shall hear my voice: And there shall be one fold and one shepherd. " (Douay-Rheims)

Who are these ʻother sheepʻ? The answer is the Gentiles (those not Jewish) We can take a look at some respected Catholic biblical commentaries as well as the writings and homilies of the Early Church Fathers to expound :

MacEvilly, in his commentary states  “ ʻAnd other sheep I haveʻ etc. He refers to the Gentile world, whom He meant to call into His Church, bestowing on them the priceless gift of faith" (MacEvilly, J. (1902). An Exposition of the Gospel of St. John (209) Benziger Brothers.

Haydock continues the same sentiment by saying that the signification of the ʻone foldʻ later in the verse is that "there shall be one church of Jews and Gentiles converted." (Haydock's Catholic Bible Commentary, 1859)

St Thomas Aquinas, in his famous Catena Aura, confirms this understanding by showing the commentaries of several Church Fathers including Pope St. Gregory I  (A.D. 590) and the Doctor of Grace, St. Augustine

" Gregory. (Hom. xiv.) But as He came to redeem not only the Jews, but the Gentiles, He adds, And other sheep I have, which are not of this fold.

Augustine. (de Verb. Dom. s. 1) The sheep hitherto spoken of are those of the stock of Israel according to the flesh. But there were others of the stock of Israel, according to faith, Gentiles, who were as yet out of the fold; predestinated, but not yet gathered together. They are not of this fold, because they are not of the race of Israel, but they will be of this fold: Them also I must bring." (St. Thomas Aquinas, Cardinal Newman. Catena Aurea, Volume 4)