The Phoenix, an Emblem of our Resurrection 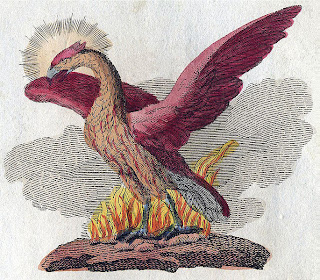 The story of the Phoenix, the bird that dies and then rises it from its ashes, is legendary. Its made its way from the stories of ancient eastern lands all the way to modern fantasy tales. What some Catholics don't realize is that the Phoenix is much more than a cool story. The Phoenix actually played a role in early formation of some essential Catholic Dogma. One of these dogma is that of the ʻResurrection of the bodyʻ.

St. Clement of Rome (Pope) famously used the Phoenix as sign of our bodily resurrection. It was best encapsulated in his Epistle to the Corinthians :

"Let us consider that wonderful sign [of the resurrection] which takes place in eastern lands, that is, in Arabia and the countries round about. There is a certain bird which is called a phœnix. This is the only one of its kind, and lives five hundred years. And when the time of its dissolution draws near that it must die, it builds itself a nest of frankincense, and myrrh, and other spices, into which, when the time is fulfilled, it enters and dies. But as the flesh decays a certain kind of worm is produced, which, being nourished by the juices of the dead bird, brings forth feathers. Then, when it has acquired strength, it takes up that nest in which are the bones of its parent, and bearing these it passes1 from the land of Arabia into Egypt, to the city called Heliopolis. And, in open day, flying in the sight of all men, it places them on the altar of the sun, and having done this, hastens back to its former abode. The priests then inspect the registers of the dates, and find that it has returned exactly as the five hundredth year was completed." (The First Epistle of Clement to the Corinthians J. Keith, Trans.). Clement of Rome. (1897). In A. Menzies (Ed.), The Ante-Nicene Fathers, Volume IX)

Other Church Fathers such as St. Ambrose and early ecclesiastical writers, such as Rufinus of Aquileia and Tertullian, also used the Phoenix illustration to defend Catholic Doctrine. Here Tertullian, as St. Clement did, defends the ʻResurrection of the bodyʻ:

"What can be more express and more significant for our subject; or to what other thing can such a phenomenon bear witness? God even in His own Scripture says: “The righteous shall flourish like the phœnix;” that is, shall flourish or revive, from death, from the grave—to teach you to believe that a bodily substance may be recovered even from the fire."(Tertullian. "On the Resurrection of the Flesh". Trans. Peter Holmes. The Ante-Nicene Fathers, Volume III, 1885. 554.)

Church historians and Patristic commentators are not certain whether or not each of these writers ACTUALLY believed that the Phoenix existed or if they were just using the analogy as a teaching tool. However St. Augustine, in his commentary of the Psalms (A.D 400), as well as the great apologist Cardinal Newman (1877) both remark that the Early Fatherʻs actual belief/non-belief in the existence of Phoenix means very little since their use of the ʻillustrationʻ of the Phoenix ITSELF is proof of their belief in the bodily Resurrection.

In fact Ludwig Ottʻs explanation of the De fide teaching that ʻAll the dead will rise again on the last day with their bodiesʻ mentions St. Clement and the Phoenix:

"St. Clement of Rome bases it by analogy on nature, the tale of the wonder bird, the Phoenix, and on the writers of the Old Testament (Cor. 24–26). In defence of the Christian faith in the resurrection" (Ott, Ludwig. Fundamentals of Catholic Dogma. 1957. 490)

Whether Phoenix birds exist or not is perhaps a topic for another blogpost :) Catholics can, however, undoubtedly embrace the Phoenix as a Catholic Symbol, an Emblem of our Resurrection,  as it most definitely played an important role in helping the Early Church articulate this important Dogma.