Pentecost Sunday - ʻThe Father is greater than Iʻ 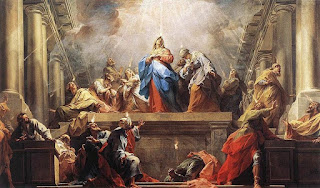 The Gospel for Pentecost Sunday was from John 14:23-31. What did Jesus mean when, in verse 28, he says “for the Father is greater than I”?

It is an important question to address. In fact Cardinal Newman points out in his “The Arians of the fourth century” that this verse was often used by the Arians to attempt to show that the Son was not consubstantial with the Father. The Haydock's Catholic Bible Commentary (1859) concisely demonstrates the orthodox interpretation of this verse and also refutes the false claims of the Arians:

“According to the common exposition, Christ here speaks of himself, as made man, which interpretation is drawn from the circumstances of the text, Christ being at that time, going to suffer, and die, and shortly after to rise again, and ascend into heaven, all which agree with him, as man, and according to his human nature. But the Arians can take no advantage from these words, (though with divers of the ancient Fathers, we should allow them to be spoken of Christ, as the Son of God:) the Father may be said in some manner to be greater than the Son, if we consider the order of the divine processions, that is, that the Father is the first person, and proceeds from no other; whereas the Son proceeds from the Father. If any one, says S. Chrys. will contend, that the Father is greater, inasmuch as he is the cause, from which the Son proceedeth, we will bear with him, and this way of speaking: provided he grant that the Son is not of a different substance, or nature. S. Athanasius allows the same, and takes notice, that though the Father is said to be greater, yet he is not said to be better, nor more excellent, than the Son; because they are one and the same in substance, nature, and other perfections. Wi.—The enemies of the divinity of Christ here triumph, and think they have the confession of Christ himself, that he is less than the Father. But if they would distinguish the two natures of Christ, their arguments would all fall to the ground. Jesus Christ, as man, and a creature, is inferior to his Father, the Creator; but, as God, he is, in every respect, equal to him. S. Basil, S. Aug. &c.—Others, likewise, answer it thus: Following the confused opinion of the world, and even of the apostles themselves, who as yet only considered Christ as a prophet, and as a man, eminent in virtue and sanctity, he was less than the Father. S. Chrys. Leont. Theophyl. Euthym.—And likewise the title of Father, (as we generally use the word) is greater, and much more honourable, that that of Son; and in this respect, Christ is inferior to his Father. S. Athanas. S. Hilar. S. Epiph. S. Greg. Nazianz. and S. Cyril.—But this appellation, though really true, does not destroy the equality of the persons, because Christ has declared, in numerous other places, that he is equal to the Father; that he is in the Father; and that he and the Father are one.”