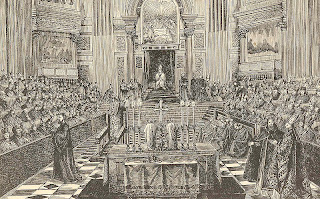 The solemn definition concerning the Infallible teaching of the Roman Pontiff was given in the 4th session of Vatican 1:

"We teach and define that it is a dogma divinely revealed: that the Roman Pontiff, when he speaks ex cathedra, that is, when in discharge of the office of Pastor and Teacher of all Christians, by virtue of his supreme Apostolic authority, he defines a doctrine regarding faith or morals to be held by the universal Church, is, by the divine assistance promised to him in Blessed Peter, possessed of that infallibility with which the divine Redeemer willed that His Church should be endowed in defining doctrine regarding faith or morals; and that, therefore, such definitions of the Roman Pontiff are of themselves, and not from the consent of the Church, irreformable." (McNabb, V. (1907). The Decrees of the Vatican Council. 46–47)

This same teaching was reaffirmed in the new Catechism of Catholic Church:

"The Roman Pontiff, head of the college of bishops, enjoys this infallibility in virtue of his office, when, as supreme pastor and teacher of all the faithful—who confirms his brethren in the faith—he proclaims by a definitive act a doctrine pertaining to faith or morals"(CCC 891)

1. The Pope speaking  as pastor and teacher of the universal Church (The SUBJECT)
2. He DEFINES (The ACT)
3. A doctrine of faith or morals (The OBJECT)

(This criteria summary, including the allocation of the subject, act, and object, comes from the book ʻCathedra Veritatisʻ by John P. Joy, S.T.L. Its an excellent book that addresses the extent of Papal Infallibility. You can purchase the book at http://unamsanctamcatholicam.blogspot.com . I highly recommend it!)

The two most noted examples of solemn Papal definitions are ʻIneffabilis Deusʻ of Pius IX on the Immaculate Conception as well as Pius XIIʻs ʻ Munificentissimus Deusʻ on the definition of Assumption of the Blessed Virgin. A quick look at those definitions is good way to see the rubrics set up in Vatican I in action. Ill add, in bold, the notes of subject, act, and object

"Accordingly, by the inspiration of the Holy Spirit, for the honor of the Holy and undivided Trinity, for the glory and adornment of the Virgin Mother of God, for the exaltation of the Catholic Faith, and for the furtherance of the Catholic religion, by the authority of Jesus Christ our Lord, of the Blessed Apostles Peter and Paul, and by our own [subject] : "We declare, pronounce, and define [act] that the doctrine which holds that the most Blessed Virgin Mary, in the first instance of her conception, by a singular grace and privilege granted by Almighty God, in view of the merits of Jesus Christ, the Savior of the human race, was preserved free from all stain of original sin, is a doctrine revealed by God [object] and therefore to be believed firmly and constantly by all the faithful." (Apostolic Constitution, "Ineffabilis Deus". Pope Pius IX,  Dec 8, 1854.)

"Accordingly, after We directed Our prayers in supplication to God again and again, and invoked the light of the Spirit of Truth, for the glory of Almighty God, who lavishes His special benevolence on the Virgin Mary, for the honor of her Son, the immortal King of the Ages and the victor over sin and death, for the increasing glory of the same august Mother, and for the joy and exultation of the whole Church, by the authority of our Lord Jesus Christ, of the Blessed Apostles, Peter and Paul, and by Our own authority [subject] We pronounce, declare, and define [act] that the dogma was revealed by God [object], that the Immaculate Mother of God, the ever Virgin Mary, after completing her course of life upon earth, was assumed to the glory of heaven both in body and soul." (Apostolic Constitution, “Munificentissimus Deus,” Nov. I, 1950)

In future blog posts Ill go through some of the other ʻsolemn papal definitionsʻ listed by modern theologians, under the criteria of Vatican I.

image from the 'Public domain' via wikimedia commons (PD1923). Vatican I. Karl Benzinger