The ʻRogation Daysʻ after the 5th Sunday after Easter 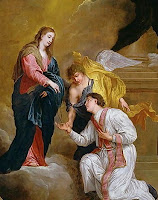 The Rogation Days are the "Monday, Tuesday, and Wednesday before Ascension Day are observed by all Catholics of the Latin rite as days of solemn supplication, and are called Rogation days because the Litany of the Saints is chanted in the procession which takes place on each of the three days, rogatio being the Latin equivalent for the Greek word litany. " (Addis, W. E., & Arnold, T. (1887). A Catholic Dictionary)

The observance of the ʻRogation Daysʻ started in the 5th century when St. Mamertus (who was Bishop of Vienne) instituted these ʻlitaniesʻ as a public supplication asking God to hold back his wrath upon their city which had gone through nearly half a century of various calamities. As most true immemorial customs usually do, the example of the ʻRogation Daysʻ in Vienne was soon followed in many places places throughout the world.  It became a general observance throughout the Church soon after Pope Leo III introduced it in Rome in 816

image from the 'Public domain' via wikimedia commons.  St. Valentine Kneeling in Supplication